For any display calibration, a probe is required for display measurements, from which the final 3D LUT based calibration is generated.

Most calibrators understand that if a probe is inaccurate any resulting calibration will also be inaccurate. And this is a key reason for Probe Matching, using a Spectroradiometer to improve the accuracy of a Colourimeter being used for display profiling.

This assumption is not correct.

When using any probe that is not accurate, the measurement data provided for LUT generation via ColourSpace is obviously therefore inaccurate, and so the final calibration LUT will be inaccurate compared to the same calibration performed with an accurate probe.

That is a basic fact, and is easily understandable.

It is assumed that even though the probe used was inaccurate, verification of the 3D LUT calibration will measure accurate results, as the same probe, with the same inaccuracies, is being used, and therefore any measurement errors in the verification will be down to poor calibration results from the 3D LUT generation.
As stated above, this assumption is incorrect!

The inaccurate verification is not showing the 3D LUT generation has been performed incorrectly or badly, but, as the original measured values were inaccurate the generated LUT will have inaccurate correction values, plus the probe will again be reading the verification colours inaccurately.

The inaccurate verification is telling you that there is a problem with the probe's accuracy...

Internal probe matrices or EDRs should not be relied on for calibration accuracy
The use of Probe Matching to a Spectro is always recommended, using ColourSpace's unique FCVM or MPVM probe matching

The following is an example of errors introduced into a LUT based calibration, using a deliberately inaccurate Probe Matching matrix with an i1D3 probe, and a Grey Ramp RGB Quick Profile.

The following graphs show an initial profile of the same wide gamut display, this time with a deliberately inaccurate Probe Match enabled. The verification of a Rec709 calibration, using the same probes match settings, show the result as being inaccurate - due to the original probe measurements being inaccurate.
(The Probe Match introduced a simple -0.02 x offset into Green only.) 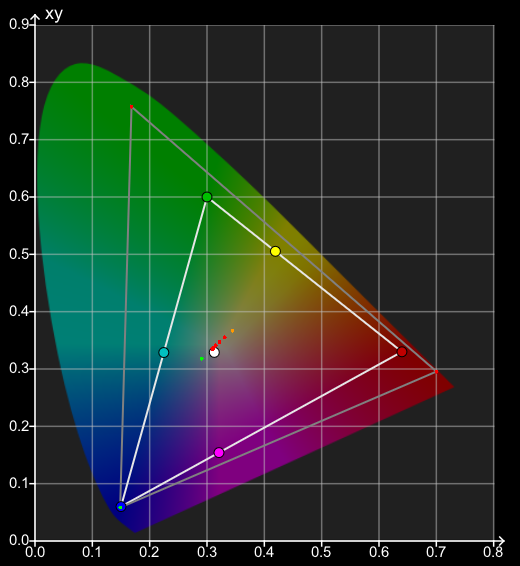 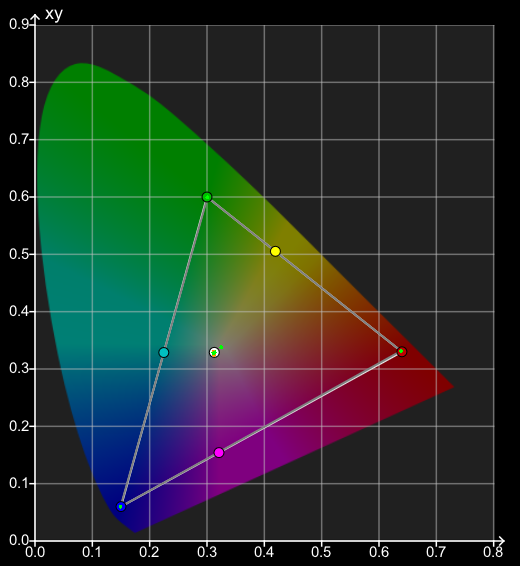 Click the above graphs to directly compare to the Accurate Probe graphs above to see the deliberately introduced probe match error in the green measurement, and the inaccurate LUT verification caused by the inaccurate probe readings.

The above shows the importance of using probes that accurately measure and profile the display being calibrated, and is why Probe Matching to an accurate Spectro is real necessity for calibration accuracy.

It is not enough to rely on manufacturer provided probe matrices, such as X-Rite's i1D3 EDRs, as they are at best generic compromise settings, having not been generated on your specific display, as well as the need to know exactly what backlight technology your display actually uses. Unfortunately, most display manufacturers to not provided accurate information on the backlight used, and often change the technology without warning.

Probe matching to a good Spectro is the only viable option for display calibration accuracy.