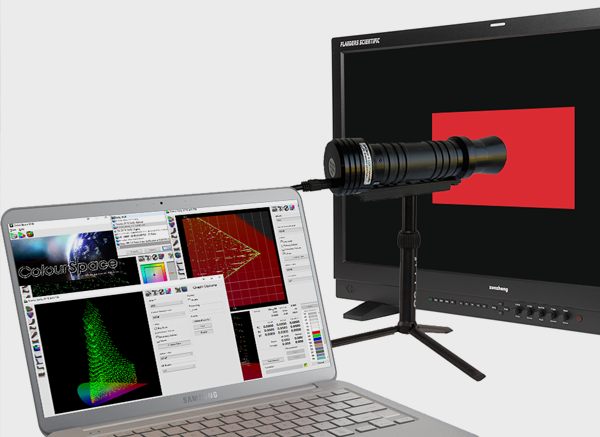 ColourSpace uses a Sub-Range approach to patch scaling, which means it will define the output patch triplet values based on the patch scale range set within the Settings menu.

Resolution sets the Bit Depth used to define patch values within Manual Measure, and the bit depth sent to external TPGs, depending on their capabilities.

The Patch Scale options set the range between which the patch triplet values, sent to any attached Test Patch Generator, will be restricted to, and needs to match the display's setting for input video range. This is usually Full for PC displays, and Legal for TVs, with Extended specified for 109% super white, as sometimes used in post-production workflows.

Greater bit depth need only be used when matching a TV's CMS control points during Manual Measure adjustment, when the control points are specified in 10 bit, or greater, values

The displayed patch bit depth is defined by the selected Resolution value. When changing Resolution bit depth, the patch values are absolute, so if a 235 (8 bit) patch is displayed, and the Resolution is changed to 10 bit, the patch displayed will remain as 235, but now as a 10 bit patch colour, so will be considerably darker.

Resolution bit depth should be set to match the display's bit depth, and that of the TPG being used. Setting to higher values will not increase calibration accuracy, and may cause less accuracy due to a miss-match between the value defined within ColourSpace, and the actual patch value displayed and measured on the display screen.

The presets held within the Characterisation menu, including Cube based and Quick Profiles, are automatically set to the range defined by the Patch Scale values set within Settings.

Patch Resolution is defined in floating point within ColourSpace, so the selected Resolution bit depth is irrelevant when performing Characterisation profiling, other than matching the signal expected by the TPG and display, as required.

If there is a mismatch, profile results will be inaccurate.

Patch Lists should have black and white patches

If the patch list lacks black and/or white patches, synthetic black/white data will be added to the profile when Saved, based on the Target Min/Max Luma values in the Settings window.

For Extended Patch Scale, the true 100% white patch is 235 (8 bit), but the patch is only needed for manual measurements

For LUT Generation, user patch sets must contain a full Grey Scale, and at least one of each R, G, & B patches. The RGB patches should also be of the same stimulus value.

The in-built profiles within ColourSpace, can be exported for reference examples. 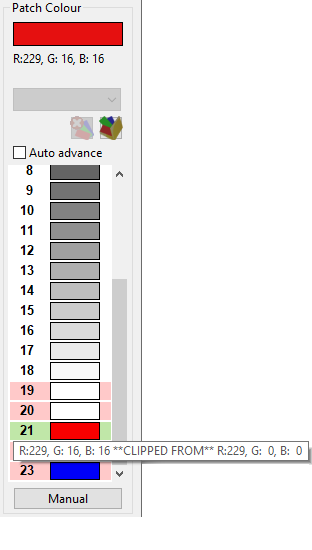 If the .csv patch list has values that go above/below the range set via Patch Scale, the triplet output will be clipped to the set Patch Scale range, with all patches below/above the set range generating the same output triplet value.

if the patch list lacks black and/or white patches for the selected Patch Scale (e.g. the patch list is Legal, but Patch Scale is set to Full) synthetic black/white data will be added to the profile, based on the Target Min/Max Luma values in the Settings window.

The patch data displayed below the Patch Colour box will shows the actual triplet to be used, and hovering over the patch within the patch list will show both the clipped patch patch triplet value, and the original patch value, with a highlight around the patch, and a **CLIPPED FROM** warning.

Note: If a user generated Preset Patch List, with Full range values, is loaded into Characterisation, Custom Sequences, and re-Exported with Patch Scale set to a different range, for example, Legal, the exported patch set will will be clipped, as defined above.

The Resolution bit depth set within ColourSpace should also be matched by the .csv triplet values, as the patch values are absolute.

If a .csv patch list with 8 bit Legal Patch Scale values is used when Resolution is set to 10 bit, or higher, the peak patch level will be limited to 235 (at the set bit depth), and will be darker than expected.

The concept of calibrating a display to 109%, extended range, to allow for super white, is not something that should be required for home TV calibration, as no broadcast material exceeds Legal range.

However, for post-production, 109% Extended Range is a valid concept, and needs to be understood with respect to Patch Scale.

To see over-range data, the graphs will need to be zoomed-out.

Limit Range limits the patch range such that the defined nits value becomes the peak of the measured range, within the selected Patch Scale range.

If using Manual Measure, the sliders will be restricted to the set maximum value.

If a user defined Preset patch list is used, any patches over the set Limit Range value will be clipped, both in Manual Measure, and Characterisation.

When using ColourSpace's in-built patch sets within Characterisation, the whole patch range is re-scaled to fit within the defined Limit Range value.

Regardless of the method used to display the patches, the saved profile will plot the measured range within the defined Patch Scale, with the 1D graphs, such as EOTF, showing just measured range. 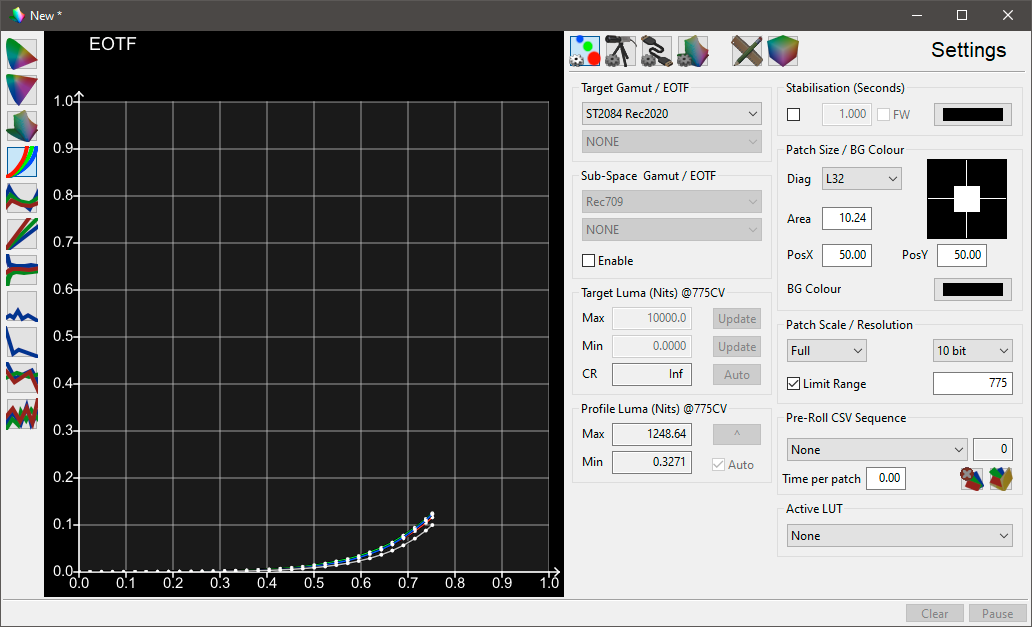 The above graphs show a pre-calibrated PQ ST2084 preview display, with a max peak luma of 280 nits. After profiling with a Limit Range value of 157 (8 bit), the first graph shows the profiled 280 nits range plotted within the full PQ ST2084 10,000 nits, while the second graph shows the same profile plotted against a PQ ST2084 colour space set to 280 nits peak.

Critically, the Limited Range profile can be used to generate a calibration LUT, making it possible to profile a PQ based HDR display, with a burnt-in PQ EOTF active, and generate a more accurate calibration. No requirement to be forced to disable the PQ EOTF and replace with a pure power law EOTF.

As an example, we are assuming the display to be calibrated has a fixed PQ EOTF with a pre-calibration hard clip at something over 1000 nits, enabling 1000 nits to be set at the peak value.

The first step is to define the Limit Range value required.

The target code value should be lower then the actual nits peak of the display, especially if the white point is inaccurate, to allow headroom for the calibration correction, as all calibration is subtractive.

The defined target value is the value to use for a new User ST2084 colour space.

The profile can then be used to generate a calibration LUT.

We therefore need to compress the output of the cube so that 0-1023 maps to 0-769.
This can be done using the LUT Tools, LUT Adjustment, and the Maths Append Equation option.
(Append is important - not Prepend.)

The correct value is the inverse of the Limit Range value set initially within Settings. For the 769 value used in this example the value is approx. 75% of full the range of the LUT.

This will generate a LUT that operates between 0-769, in a 0-1023 (10 bit) container, and can be used to calibrate a PQ HDR displays that has an underlying. burnt-in, PQ EOTF.

With Patch Scale set to Legal, the Brightness Test Patch is lifted, such that zero black becomes 16 (8 bit), and the Contrast Test Pattern is lowered, such that 100% white becomes 235 (8 bit).

Changing the Patch Scale setting for any given profile, after profiling or after recalling a profile from the library, will invalid the profile data displayed.

The Patch Scale setting must match the Profile

If there is a mismatch, the displayed profile data will be invalid.

The Point Info pop-up dialogue window is also constrained by the Patch Scale value settings, as the actual data in the profile is floating point, so normalised between 0-1.

Therefore, to see the actual point info as originally saved into the profile, the Patch Scale settings must be as set when the profile was made.

If the Patch Scale values are set differently, the point info triplet data will be re-scaled to match the selected range, maintaining the actual measured data relationship for graphing. This can, and will, result in invalid point data.

The Resolution bit depth also constrains the data displayed in the Point Info dialogue, and should ideally use the same Resolution value as used when the profile was generated, to see the point info as originally saved into the profile.

The above shows a 10 bit, 1 LSB step, profile, displayed with Resolution set alternatively to to 8 bit, and 10 bit. When set to 8 bit, blocks of 4 input patches all map to the same output patch number, as is expected.

External Test Patch Generators, and TPGs built into displays, display the RGB triplet value, as specified within ColourSpace. The correct Patch Scale and Resolution bit depth settings depend on the TPG itself, as well as the display's own capabilities/settings.

When connected to an external TPG, be that a stand alone TPG, LUT Box with TPG capability, or display with in-built TPG, ColourSpace will send the correct triplet value, based on the hardware's specific capabilities.

It most instances, this means the Resolution bit depth set within ColourSpace is irrelevant, as any set value is defined in float, before be converted into the correct triplet integer for the TPG in use.

For most applications, 8 bit Resolution will be the default setting.

If the Resolution is set to a bit depth greater than the TPG's/display's capabilities, capabilities there is the potential for duplicate patches being sent, slowing profiling unnecessarily.

If the display's screen has a bit depth that is lower than the input signal it accepts, there will also be flat spots on the profile data, if the number of patches exceeds the screen's native bit depth.

Greater bit depth should only be necessary when matching a TV's CMS control points during Manual Measure adjustment, when the control points are specified in 10 bit, or greater, values.

When performing automated profiling, using Characterisation, either with the in-built patch sets, or user defined CSV lists, using a bit depth greater than 8 bit will not increase calibration accuracy, regardless of the bit depth any tpg or displays works to.

This is because ColourSpace uses float values internally, and converts those values into the correct integer triplet values, at the correct bit depth, for the TPG in use.

This is equally true for Manual Measure, and the manual setting of patch values either by the sliders, or Preset CSV lists.

Outside of matching a TV's CMS control points during Manual Measure adjustment, the only other occasion that using a greater bit depth is really viable is when using a User Patch Set that includes 1LSB steps, in the defined bit depth, and is being used to assess the full resolution response of a given display.

This simplest method for Test Patch Generation is to use the direct HDMI output from the ColourSpace PC. This can provide bit perfect patch generation, without the need for any additional hardware.

An in-depth User Guide can be found on the Direct Profiling page.