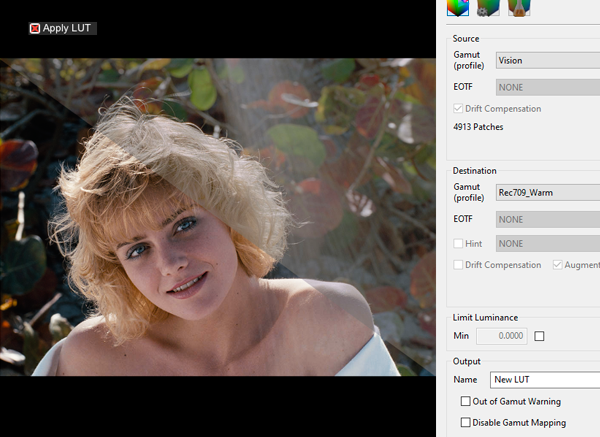 This page defines how to use ColourSpace to develop for yourself the Look LUTs that can be downloaded via the Customer Downloads or General Downloads page.

This means the LUTs are true Film Emulation LUTs, generated with true film spectral data, and not simple Look LUTs.

Both are Light Illusion developed systems that have provided the majority of the film emulation data used by the world's leading studios, film labs, post-production facilities, and those providing genuine film emulation LUTs, such as Koji.

Film profiling is a service performed by Light Illusion and has been used by many of the world's top film studios, film labs, and post facilities when performing film based post-production workflows.

The first Look LUT is a fairly simple one to generate, as it is based on the in-built Kodak Vision film stock data, and the basic operation is to simply build a LUT with Kodak Vision as the Source colour space, and Rec709 as the Destination.

Using the default Rec709 White colour space values (0.3127x, 0.3290y) results in a LUT that has the film's warmer white point and grey scale burnt into it. This is as is needed for true Film Emulation LUT generation, but is not what we want for this Look LUT, as we want to maintain the standard cooler D65 white point of video, but with the feel of the film's contrast and colourimetry.

So, we will alter the Rec709 colour space White coordinates to better match the film's warmer white, which will result in a LUT that maintains the standard video D65 white and neutral grey scale, as the LUT will not be changing the colour temperature.

To locate the correct xy values required, the Vision preset profile can be loaded into a Profiling window, and the peak white value interrogated via the Points Info dialogue.

Alternatively, the white point can be extracted by using the Film Emulation LUT as an Active LUT within ColourSpace, and on an accurately calibrated Rec709 display measuring a the xy coordinates of a white patch through the LUT. The measured xy value become the new White coordinated for the new colour space

With the Rec709 White xy values changed to warmer film projection values the result is a LUT that does not alter the white point.

However, film has a grey scale that is not the same colour temperature throughout its range, as can be seen in the above 1D graph where the grey scale is warmer in the high grey values, and cooler in the lower values, and we will deal with that using the LUT Adjustment filters to remove the film based colour tint contamination.

The LUT Filter to be used is Axis Blend, set to effect the full Grey Scale range, using Low On 0, and Hi On 1.
(See the ColourSpace Interactive User Manual for more information on the LUT Adjustment tools.)

The Film Look LUT for Log images is basically now complete, and can be Saved and Exported in the required LUT format.

However, there are additional adjustments that can be made...

Looking that the 1D Graph the LUT profile can be seen to be slightly irregular, which is correct as the LUT is based on true film density measurements, and that is the nature of film. But, a Smooth LUT Adjustment Filter can be used to remove these irregularities.

The Smooth process will introduce some colour temperature tint back into the grey scale as the LUT does not contain even colour distribution throughout, obviously, so the Axis Blend filter can be re-applied to re-normalise the grey scale, with the Smoother profile.

Regardless if additional smoothing is applied, or not, the LUT is now complete, and can be used as a Look LUT for grading work. As with all Look LUTs the LUT is best applied at the end of the image path, with grading performed under the LUT.

For use with Video images the above LUT needs to be converted to expect image that are Video, not Log based.

There are different approaches to this, with the most obvious being to use the LUT Adjustment Prepend Log -> Vid process. However, this conversion is technically accurate, which is not what we always want, and in this case is not what we want...

For this conversion we want a LUT that looks better on Video images, rather than just being a Log to Video conversion, so we are going to be a bit more creative in the conversion process.

The first thing to realise is what we really need to do is remove most of the log based Contrast, as TV Legal material already has the maximum contrast available burnt to it, but we also need to keep a bit of the film contrast Look & Feel.

With this in mind, we need to Invert the contrast component of the Film Log LUT, so that the inverted data can be subtracted from the Log Film Look LUT. And the first step is to convert the 3D LUT into a 1D LUT, so only the contrast data is contained within the LUT, and no colourimetry data.

Using LUT Adjustment/Filters/Grey Blend, with Low On 0, and Hi On 1, will convert the 3D LUT into a 1D LUT. With the LUT converted into a 1D format all the colourimetry data is stripped out, leaving just the contrast information.

This 1D LUT can then be inverted using LUT Adjustment/maths/Invert.

Within ColourSpace there are many different ways to reach any end result.

An alternative to using the the LUT Adjustment Filters to generate a 1D only LUT from a 3D LUT is to simply export the LUT in any of the available 1D LUT formats. This exported 1D LUT will strip out the colourimetry (Gamut) data, leaving just the contrast (EOTF) information.

With the 1D LUT exported, you can then use the LUT Adjustment/Maths/Subtract function to subtract the exported 1D LUT from the original 3D LUT, rather than using the Invert & Addition workflow outlined above. The resulting LUT will have no contrast component at all, but will contain all the film colourimetry.

LUT Adjustment/maths/Add can now be used to add back the original Film Emulation D65 LUT to this inverted 1D LUT the result would be a LUT with no contrast alteration at all, but with all the film colourimetry, which may be what you want... 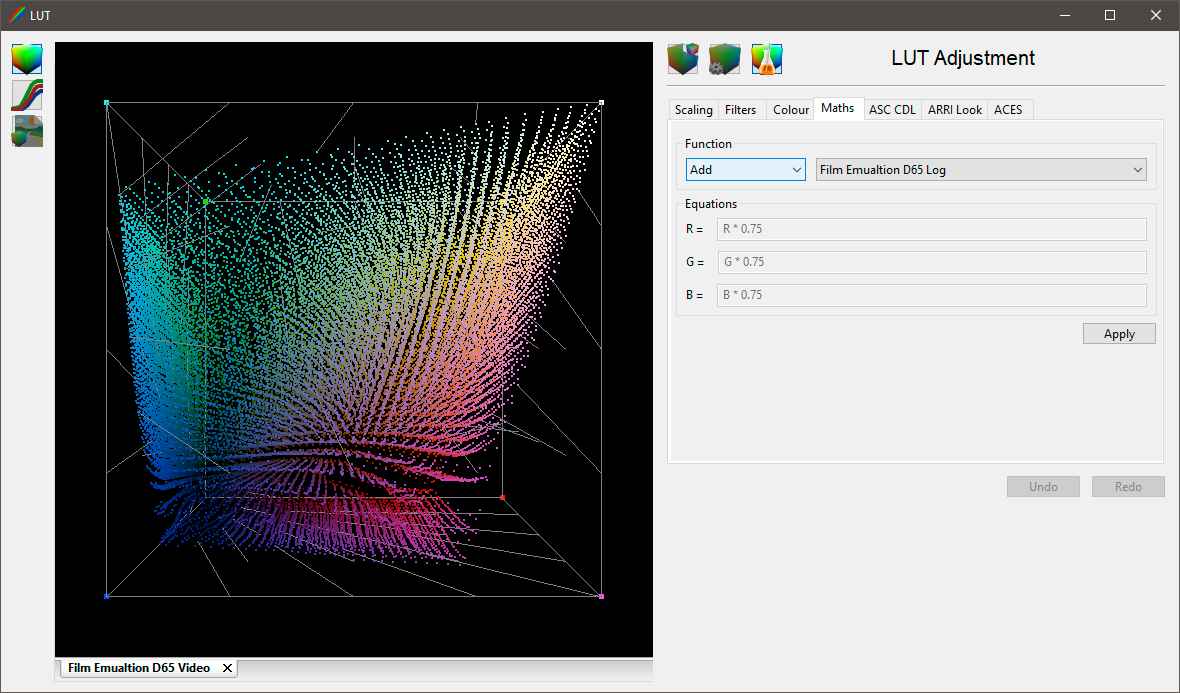 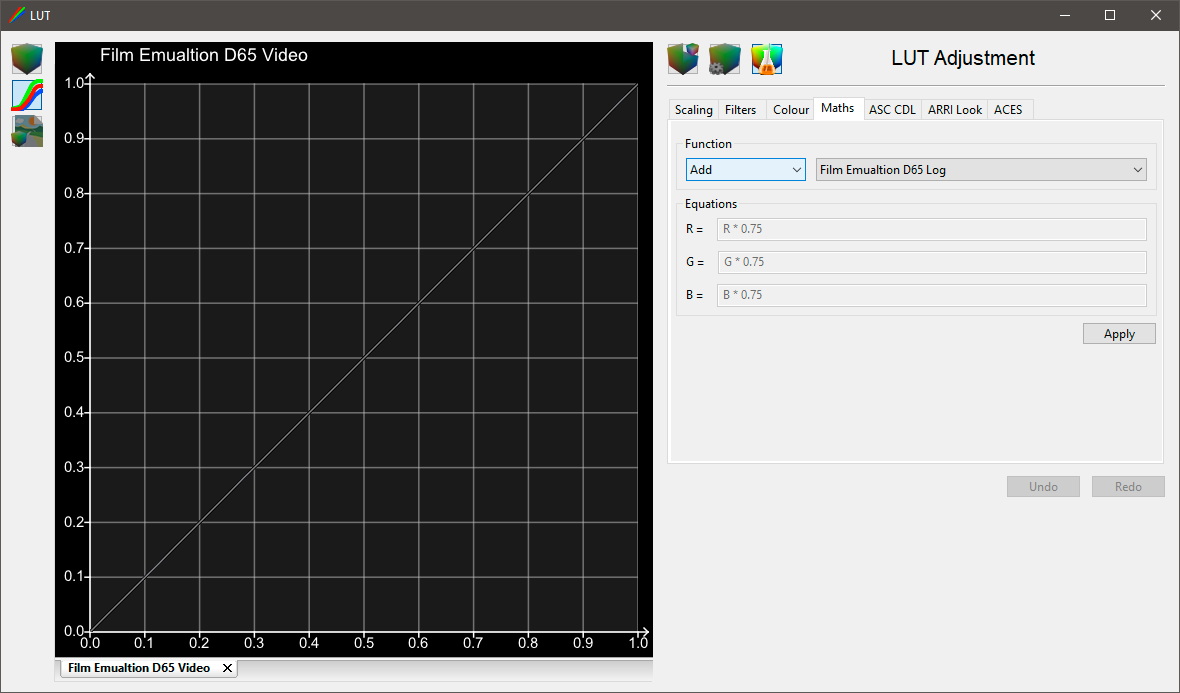 The result of such as LUT would be to alter just the colourimetry of the image.

However, for a good Look LUT we actually want a LUT that retains has some of the film's contrast feel, and so we will use the Smooth filter, with values Low On 0, Hi On 1, and Radius Approx. 5.75, to reduce the accuracy of the inverted 1D LUT, so that when the original LUT is Added to the inverted 1D LUT some of the contrast look and feel is retained.
(Note: If the Smooth filter introduces and colour tint into the grey scale, Axis Blend, set to effect the full Grey Scale range, using Low On 0, and Hi On 1, can again be used to remove any colour component from the grey axis)

When the original 3D Film Look LUT is added to this Smoothed 1D LUT the resulting 3D LUT will retail some of the Film contrast look & feel, as well as all the colourimetry. 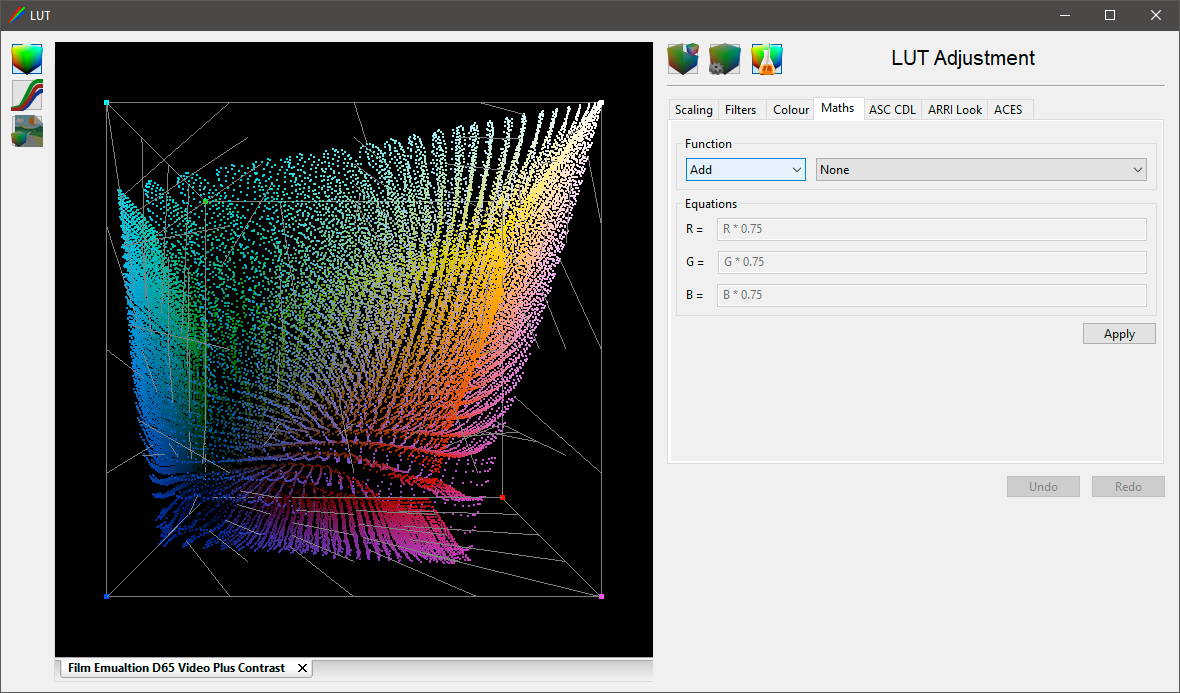 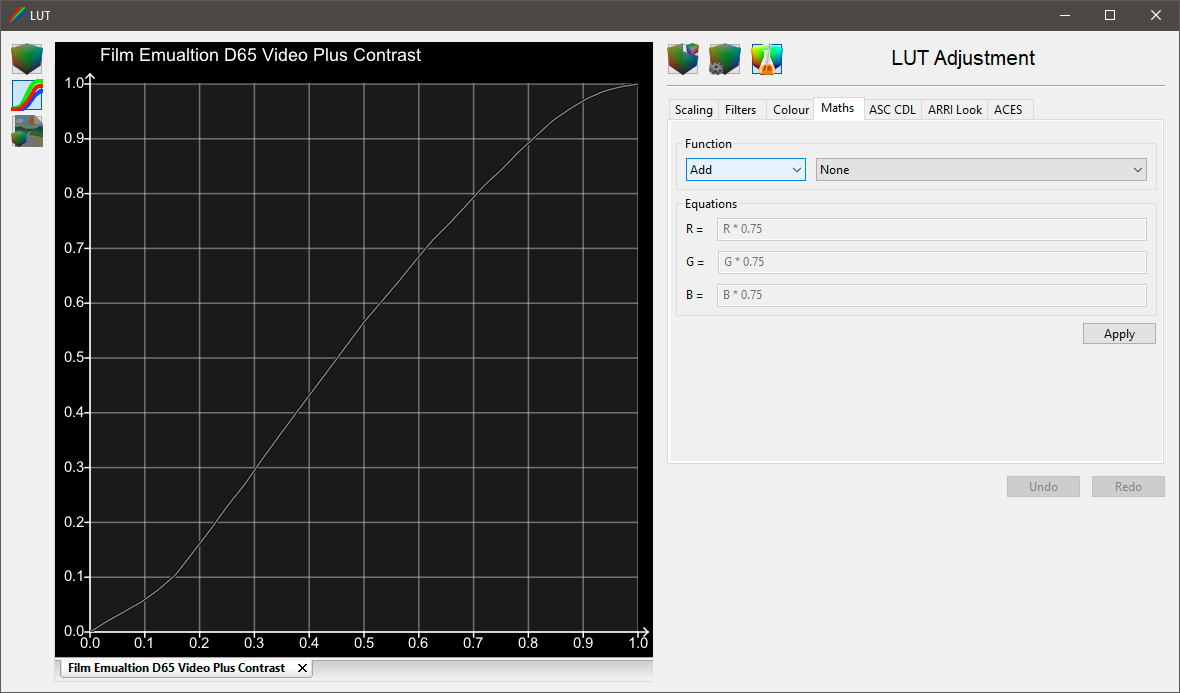 The result of such as LUT would be to have some alteration of contrast, plus alter the colourimetry of the image.

And it should be obvious that the same approach can be used to alter the contrast change of the original Film Look Log LUT, using different Smooth filter settings to attain the desired end result.

Within ColourSpace there are many different ways to reach any end result.

The ARRI Log Look LUT based on ACES data was made using ACES v1.3 CTL data, as outlined on the ColourSpace &ACES page, and is not a Film Emulation LUT as it takes the Arri Log C data and maps into Rec709 using ACES data.

With the necessary ACES CTL tools installed on the ColourSpace PC, the following is the procedure used to generate the Look LUT.

First, within ColourSpace make a new Unity LUT with LUT Tools, as this will be the blank canvas upon which the ACES based changes will be made to generate the Look LUT.

Then use LUT Adjustment, ACES, ACES ctl, and Import, select the CTL files to be used using Ctrl, Left Click.

The Import button opens a navigation window to allow external ACES ctl/clf files to be imported, and applied the selected LUT.

The result of the applied ACES CTL data will be seen immediately after Open has been clicked.

The ARRI ACES Look LUT is basically now complete, and can be exported in the required LUT format.

The final resulting LUT will have the blacks smoothed-out, with no black clipping. The LUT colourimetry is also very simple, with no applied film emulation, but does still including the in-built RRT colour distortion.
(Note the colour temperature variation shown in the 1D graph - this is due to using the ACES D60 ODT within this example, to show the colour temperature change within the 1D graph.)

The result of the LUT is to apply the colour transforms as extracted from the ACES CTL files to any image the LUT is used with.
Here, we are using an Alexa image from one of Geoff Boyle's CML Camera Tests.

Again, it should be obvious that the LUT can be adjusted as required to generate different Look LUTs using the different LUT manipulation Filters on top of the applied ACES CTL data. This particular Look LUT may benefit from a small amount of Saturation Reduction for example.

The Camera Spaces options, within the Manages Space Library, enables the generation, previewing, and analysis of Look and Technical Conversion LUTs for a range of digital cinematography cameras, specifically those that shoot and capture Log and Wide Colour Gamut.

Using the Modify option, both Technical and Looks LUTs can be generated.

For additional information see the Camera Options page of the website.